Who has ever seen a kitten spining on himself to catch his own tail ? It’s a show adorable and hilarious at the same time.

If it is a kitten

Playing to hunt his tail is completely normal for a kitten : indeed, a kitten is not still completely conscious that his tail is a part of his body, and this small thing which stirs behind him certainly has to be a toy, or a prey.

If it is a grown-up cat 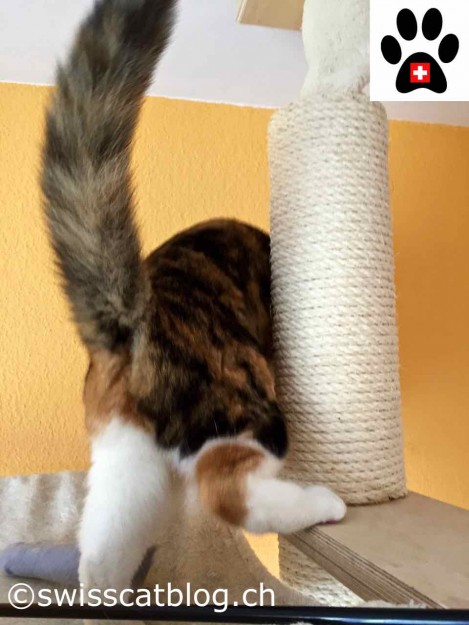 A grown-up cat knows that his tail belongs to his body and doesn’t normally play to hunt it. Certain cats with infantile temperament can again do it briefly, very occasionally. There is no reason to worry about it for the majority of cats. Pixie still hunts her tail from time to time : two pirouettes, less than 10 seconds, then she goes to play with a ball or another toy.

But in certain cases, this “game” can degenerate and be the sign of a health problem or a behavior disorder. The cat can attack his tail and bite it violently : the pain he feels then and the situation are going to terrorize him. This scene can reproduce repeatedly, and the situation becomes more and more terrible for the cat. How to help him ?

Only a veterinarian, or better, a behaviouristic veterinarian, can propose an adequate treatment. The aggressive behavior of a grown-up cat to his tail can be due to an abscess, to an damage of the nervous system, to anxiety or still to hyperactivity.

Do you know cats who hunt their tail ?

26 thoughts on “Why does your cat hunt his own tail ?”