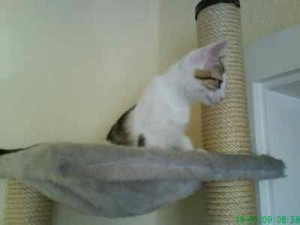 Céleste, sister of litter of Loupi, was a pure product of the farm nearby in the village. Endowed with an imperious and well dipped character, she led her world as she understood it. She adored Momo, who did it as well.

Céleste showed her disapproval or her contrariety by pissing in a frank and assumed way in strategic places as the sofa, the sleeping bag, or the basket of clean laundry. She made the law in the garden and in the surroundings, and did not hesitate to attack any animal intruder, even bigger than her. At the same time, she showed itself wild with all the hoomans, and let herself not either cuddle, or catch outside of the house. In the big nearby meadow, she was the queen : the herd of 40 cows which arrived had to by-pass Her Majesty ; Céleste found so very funny to play with the tail of both horses. 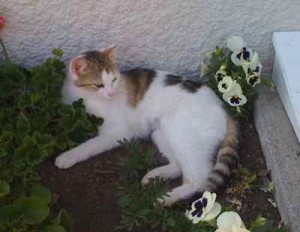 Claire and Momo think that her audacity cost her the life : summer night, they were woken by the noise and the shouts resulting from a serious fight between several animals among which foxes. The following morning, Céleste had disappeared. After several weeks of search, it was necessary to face the facts : the chances to find her were more and more thin…